Every 10 years after the federal census, California must redraw the boundaries of its Congressional, State Senate, State Assembly, and Board of Equalization districts in order to reflect the most recent population data. In 2011, those lines were drawn by a 14-member Citizens Redistricting Commission (CRC), comprised of individuals from varied ethnic backgrounds and geographic locations in the state. To maintain balance, the CRC includes five Democrats, five Republicans, and four No Party Preference voters.

Throughout 2011, CLCV Education Fund presented testimony to the CRC framing our position on redistricting.  As California is now a minority-majority state, we first urged the CRC uphold the Federal Voting Rights Act to ensure that minorities 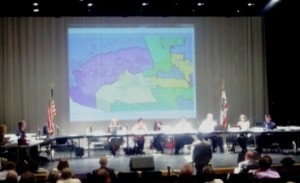 have an equal opportunity to elect representatives of their choice. Our past polling demonstrates that, especially in Latino and Asian American communities, there tends to be even greater levels of environmental sensitivity that should be respected and protected.

Secondly, CLCV Education Fund argued that districts must respect the boundaries – not only of cities and neighborhoods – but also contiguous populations that share social and economic interests that should be included within a single district for purposes of effective and fair representation, including environmental “communities-of-interest” like coastal communities, watersheds, and wetlands.

Since then, we have testified and submitted letters on behalf of the San Gabriel Mountains and Flats, the northern and southern coastal communities, and the Santa Monica Mountains. We also presented a series of generic state maps demonstrating the principle of COI in the Sierras; in the valley agricultural transit corridor; in the parts of the desert that are experimenting with renewable energy sources. Finally, we have advanced the principle of “continuity of representation” in the CRC’s renumbering of Senate seats from “north to south” assigning odd and even numbered districts. We argued against removing odd numbers especially for coastal communities that theoretically could disenfranchise voters without a legislative advocate in the State Senate for two years.

The first set of draft maps was released by the CRC on June 10, 2011.  The preliminary final draft of the new Districts was released, and the Commission voted to adopt them on August 15, 2011. (Visit the CRC’s website for more information, including interactive versions of the final maps.) These were the final lines in play during the 2012 elections.